Faces and Voices of Chicano/Latino Leaders

is a leadership-training program that was designed by the Center for Documentary Expression and Art (CDEA) and the Utah Coalition of La Raza (UCLR). The yearlong project (May 2010-June 2011) guided high-school age Chicano/Latino youth to use oral histories and photographs to document the lives of leaders in the Chicano/Latino community. Nineteen students from four high Salt Lake County schools (AMES, Highline, Horizonte, and West) participated. Students conducted more than a dozen oral history interviews of selected leaders. 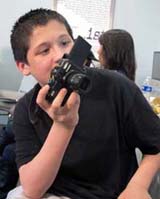 Student Photographs contains ten galleries that together present more than six hundred images students produced in the project’s first phase. Students took cameras home to depict their own lives and neighborhoods. When you enter a student gallery (each gallery holds one student’s work), you’ll encounter images selected to represent the student’s vision as well as all the useable images the student made. Several students used the camera to probe deeply and widely; other students focused more on interviewing. 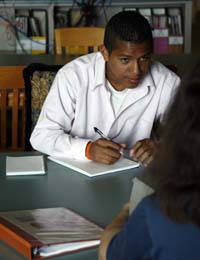 Interviews with Chicano/Latino Leaders consists of nine oral history interviews students conducted over the project’s final phases. A biography and a table of contents preface each interview; a full transcript of the interview, edited to limit redundancy, follows. If you place your mouse by a subject in the table of contents, hit your enter key, you’ll be taken to that interview subject. Asterisks in the table of contents indicate a video clip is available. Jonathan Kelen, a University of Utah film student, was the project’s film intern. Video interviews and clips are a result of his initiative to document the project and prepare the clips to fit this site. 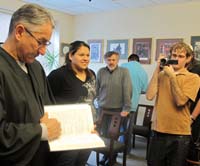 A three-minute trailer from the student filmOutside/Inside, completed in the project’s final interviewing phase, concludes web content. Motivated by the accounts of Chicano/Latino leaders, students decided to film interviews with each other and to present their stories to the community. Students originally hoped to accompany their film to community sites, where they would inform people about their individual and collective journeys, discuss film content and implications, and respond to questions during a Q&A period. Time modified their expectations. Several students graduated from high school and moved on to college; others returned to school and became involved with other plans. We are presenting this trailer from several hours of film footage (edited by local filmmaker Steve McCurdy) not as the students’ final work, but as an indication of the direction they were headed. 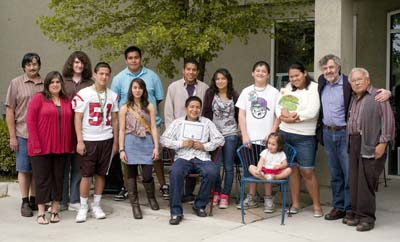 Faces and Voices of Chicano/Latino Leaderswas a challenging, inspiring, and transformative experience for our participants.

First, conducting oral history interviews after a short, ten-week training period, challenged students. Second, students had to sustain a schedule in which they gave up every other Saturday (and time in between) for nearly a year to prepare for and conduct interviews. Finally, students using public transportation to reach our classroom, faced serious weather challenges once winter arrived.

The project, however, strongly inspired students, because Chicano/Latino leaders spoke to them openly and honestly. We never asked informants to share their tough times, or risk being vulnerable. They did it because they wanted students to see them more fully. A few clear themes emerged from the interviews:

1)       Negative stereotyping of Chicano/Latino youth was (and remains) a serious hurdle in public school education;
2)       Many of today’s Chicano/Latino leaders faced extreme poverty while growing up;
3)       Having adult mentors and family support was critical to overcoming social obstacles; and
4)       Fighting discrimination was a collective and individual necessity.

The project (given the above) was transformative in a number of ways. Most obviously, students were amazed to see leaders as people who experienced setbacks and found ways to keep going. Such stories helped students realize they weren’t alone in their suffering and bewilderment, and there were steps they could take to overcome obstacles. More subtly and incrementally, students’ self confidence grew as they saw themselves able to carry out complex conversations with artists, directors of non profits, sitting judges, and members of Utah’s legislature. Possibly the greatest gift students received, though, was the realization they counted; they were the next generation of leaders; and they needed to pay attention to telling their own stories.

Students took photographs during the project’s training and subsequent interviewing phases. Kent Miles, CDEA photography instructor, introduced the fundamentals of visual literacy during the training phase and encouraged students to pay attention to lines, shapes, light, color, texture, and space—the building blocks of visual communication. Students reviewed their images in class and explored the principles of design. Students then made images that conveyed their lives and neighborhoods with the aim that several students would self-designate as project photographers and would create portraits of the Chicano/Latino leaders the group interviewed. This gallery contains images students made of their lives and neighborhoods. Photos of interviewees are included in the section that follows: Interviewees with Chicano/Latino Leaders.

Leslie Kelen, CDEA executive director, trained students to conduct interviews. In preparation for conducting formal interviews, students learned to differentiate between asking closed and open-ended questions; to formulate questions based on a person’s age and life experiences; and to utilize follow-up-questions. CDEA staff set the stage for interviews by conducting preliminary phone interviews with each Chicano/Latino leader. Formal oral history interviews followed and were conducted at an informant’s home or work place. Each interview lasted about two hours. At the start of the interview process, all students participated in an interview. This made for large group interviews and favored informants who were accustomed to public speaking. In the final phase, as students became comfortable with interview dynamics, we formed two groups of interviewers, enabling two oral history interviews to be carried out on the same day.

The idea of developing a student film started spontaneously. At the end of a Saturday meeting, after completing preparations to interview the next leader, students became intrigued by the possibility of videotaping their own stories. We turned a video camera on them and listened as two students described how they traveled to the United States. Given the excitement generated by the initial effort, we contacted Spy Hop and were invited to arrange a video session in one of their spaces. The space, as it turned out, didn’t fit our filming needs, so we contacted KUED-TV and they provided us an opportunity to film in their studio. Local documentary filmmaker Steve McCurdy joined us. He helped set up lights, sound, and controlled production details. Students served as interviewers and informants. They developed and asked their questions, and six student interviews were completed. Four of those interviews are excerpted in the trailer.

The Center for Documentary Expression and Art (CDEA) and the Utah Coalition of La Raza (UCLR) gratefully acknowledge Comcast Corporation’s generous financial contribution to this project. Comcast’s support permitted the project to be undertaken and completed.

CDEA also thanks Doris Mason, CDEA Executive Assistant and University of Utah interns Jonathan Kelen and Melissa Liad, for their conscientious and sensitive contributions to this project.

Faces and Voices of Chicano/Latino Leaders was – and is – a unique leadership training effort that required a long-term commitment from everyone involvedincluding, of course, the participating students and interviewees. We thank each of them for their heartfelt contributions.